Image sharpening is a powerful tool for emphasizing texture and drawing viewer focus. It's also required of any digital photo at some point — whether you're aware it's been applied or not. Digital camera sensors and lenses always blur an image to some degree, for example, and this requires correction. However, not all sharpening techniques are created equal. When performed too aggressively, unsightly sharpening artifacts may appear. On the other hand, when done correctly, sharpening can often improve apparent image quality even more so than upgrading to a high-end camera lens. 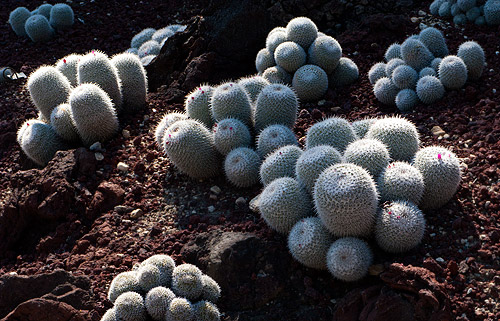 Most image sharpening software tools work by applying something called an "unsharp mask," which despite its name, actually acts to sharpen an image. Although this tool is thoroughly covered in the unsharp mask tutorial, in a nutshell it works by exaggerating the brightness difference along edges within an image:

Photo of the letter "T" 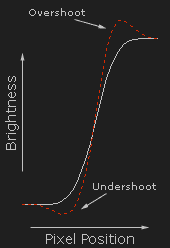 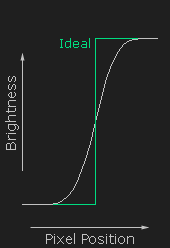 Note that while the sharpening process isn't able to reconstruct the ideal image above, it is able to create the appearance of a more pronounced edge (see sharpness: acutance & resolution). The key to effective sharpening is walking the delicate balance between making edges appear sufficiently pronounced, while also minimizing visible under and overshoots (called "sharpening halos"). 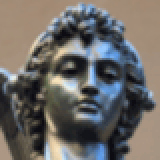 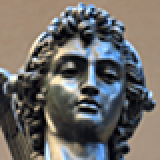 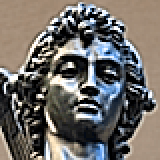 note: all images shown at 200% zoom to improve visibility

Fortunately, most of the sharpening settings within image-editing software are reasonably standardized. One can usually adjust at least three settings:

It's generally advisable to first optimize the radius setting, then to adjust the amount, and then finally to fine-tune the results by adjusting the threshold/masking setting (and potentially other settings such as "detail"). Optimal results may require a few iterations.

Most photographers now agree that sharpening is most effective and flexible when it's applied more than once during image editing. Each stage of the sharpening process can be categorized as follows:

Accounts for your image's source device, along with any detail & noise characteristics
→
Creative Sharpening

(1) Capture sharpening aims to address any blurring caused by your image's source, while also taking image noise and detail into consideration. With digital cameras, such blurring is caused by the camera sensor's anti-aliasing filter and demosaicing process, in addition to your camera's lens. Capture sharpening is required for virtually all digital images, and may be applied automatically by the camera for photos which are saved as JPEG files. It also ensures the image will respond well to subsequent rounds of sharpening.

(2) Creative sharpening is usually applied selectively, based on artistic intent and/or image content. For example, you might not want to apply additional sharpening to a smooth sky or a person's skin, but you may want to crank up the sharpness in foliage or a person's eye lashes, respectively. Overall though, its use may vary wildly from photo to photo, so creative sharpening is really a "catch all" category. It's also the least used stage since it can also be the most time-consuming.

(3) Output sharpening uses settings customized for a particular output device, and is applied at the very end of the image editing workflow. This may include special considerations based the size, type and viewing distance of a print, but it can also be used to offset any softening caused by resizing an image for the web or e-mail.

Overall, the above sharpening workflow has the convenience of being able to save edited images at a near-final stage. When printing or sharing one of these images, all that is needed is a quick top-off pass of sharpening for the output device. On the other hand, if all sharpening were applied in a single step, then all image editing would have to be re-done every time you wished share/print the photo using a different output device.

Capture sharpening is usually applied during the RAW development process. This can either occur automatically in your camera, when it saves the image as a JPEG, or it can occur manually using RAW software on your computer (such as Adobe Camera RAW - ACR, Lightroom or any other RAW software that may have come with your camera).

Automatic Capture Sharpening. Although most cameras automatically apply capture sharpening for JPEG photos, the amount will depend on your camera model and any custom settings you may have applied. Also be aware that the preset shooting modes will influence the amount of capture sharpening. For example, images taken in landscape mode are usually much sharper than those taken in portrait mode. Regardless, optimal capture sharpening requires shooting using the RAW file format, and applying the sharpening manually on your computer (see below).

Manual Capture Sharpening requires weighing the advantages of enhancing detail with the disadvantages of amplifying the appearance of image noise. First, to enhance detail, sharpen using a radius value that is comparable to the size of the smallest details. For example, the two images below have vastly different levels of fine detail, so their sharpening strategies will also need to differ: 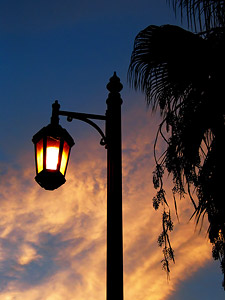 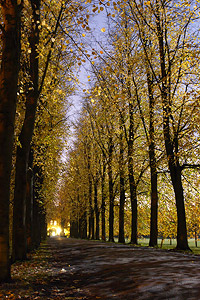 Note: The sharpening radii described above are applied to the full resolution images
(and not to the downsized images shown above).

When trying to identify an optimum sharpening radius, make sure to view a representative region within your image that contains the focal point and/or fine detail, and view it at 100% on-screen. Keep an eye on regions with high contrast edges, since these are also more susceptible to visible halo artifacts. Don't fret over trying to get the radius "accurate" within 0.1 pixels; there's an element of subjectivity to this process, and such small differences wouldn't be distinguishable in a print.

When noise is pronounced, capture sharpening isn't always able to be applied as aggressively and uniformly as desired. One often has to sacrifice sharpening some of the really subtle detail in exchange for not amplifying noise in otherwise smooth regions of the image. Using high values of the threshold or masking settings help ensure that sharpening is only applied to pronounced edges: 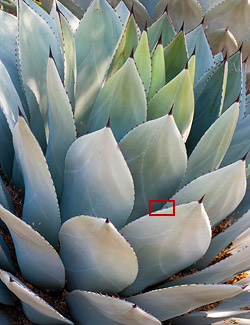 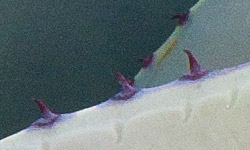 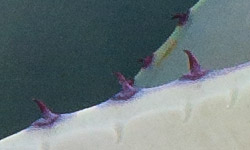 Move your mouse over above images
to see the unsharpened original.

The value used for the "masking" setting above was 25.

Note how the masking/threshold setting was chosen so that only the edges of the cactus leaves are sharpened (corresponding to the white portions of the sharpening mask above). Such a mask was chosen because it doesn't worsen the appearance of image noise within the otherwise textureless areas of the image. Also note how image noise is more pronounced within the darker regions.

If image noise is particularly problematic, such as with darker tones and/or high ISO speeds, one might consider using a creative sharpening technique, or using a third-party noise reduction plug-in. At the time of this writing, common plug-ins include Neat Image, Noise Ninja, Grain Surgery & Noiseware. However, noise reduction should always be performed before sharpening, since sharpening will make noise removal less effective. One may therefore need to postpone sharpening during RAW development until noise reduction has been applied.

While creative sharpening can be thought of as just about any sharpening which is performed between capture and output sharpening, its most common use is to selectively sharpen regions of a photograph. This can be done to avoid amplifying image noise within smooth areas of a photo, or to draw viewer attention to specific subjects. For example, with portraits one may want to sharpen an eye lash without also roughening the texture of skin, or with landscapes, to sharpen the foliage without also roughening the sky. 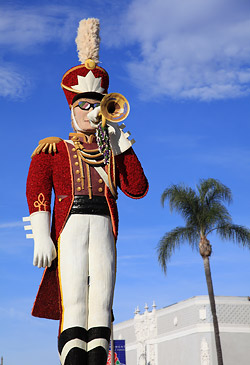 Top layer has creative sharpening applied;
mask ensures this is only applied to the white regions.

Alternatively, sometimes the best technique for selectively sharpening a subject is to just blur everything else. The relative sharpness difference will increase — making the subject appear much sharper — while also avoiding over-sharpening. It can also lessen the impact of a distracting background. Move your mouse over the top left image to see this technique applied to the previous example.

Another way of achieving the same results is to use a brush, such as a history, "sharpen more" or blurring brush. This can often be simpler than dealing with layers and masks. Sometimes this type of creative sharpening can even be applied along with RAW development by using an adjustment brush in ACR or Lightroom, amongst others.

Overall, the options for creative sharpening are virtually limitless. Some photographers also apply local contrast enhancement (aka "clarity" in Photoshop) during this stage, although one could argue that this technique falls into a different category altogether (even though it still uses the unsharp mask tool).

STAGE 3: OUTPUT SHARPENING FOR A PRINT

After capture and creative sharpening, an image should look nice and sharp on-screen. However, this usually isn't enough to produce a sharp print. The image may have also been softened due to digital photo enlargement. Output sharpening therefore often requires a big leap of faith, since it's nearly impossible to judge whether an image is appropriately sharpened for a given print just by viewing it on your computer screen. In fact, effective output sharpening often makes an on-screen image look harsh or brittle:

Output sharpening therefore relies on rule of thumb estimates for the amount/radius based on the (i) size and viewing distance of the print, (ii) resolution of the print (in DPI/PPI), (iii) type of printer and (iv) type of paper. Such estimates are often built into RAW development or image editing software, but these usually assume that the image has already had capture sharpening applied (i.e., it looks sharp when viewed on-screen).

Alternatively, one can also estimate the radius manually using the calculator below:

**PPI = pixels per inch; see tutorial on "Digital Camera Pixels." DPI is often used interchangeably with PPI, although strictly speaking, the two terms can have different meanings.
*It's generally a good estimate to assume that people will be viewing a print at a distance which is roughly equal to the distance along the print's diagonal.

The above radius estimates should only be taken as a rough guideline. In general, a larger viewing distance demands a larger output sharpening radius. The key is to have this radius small enough that it is near the limit of what our eyes can resolve (at the expected viewing distance), but is also large enough that it visibly improves sharpness.

Regardless, the necessary amount of sharpening will still likely depend on the image content, type of paper, printer type and the look you want to achieve. For example, matte/canvas papers often require more aggressive sharpening than glossy paper. A good starting point is always the default amount/percent value used by your image editing software. However, for mission-critical prints this best solution is often just trial and error. To save costs, you can always print a cropped sample instead of the full print.

Even if an image already looks sharp when viewed on-screen, resizing it to less than 50% of its original size often removes any existing sharpening halos. One usually needs to apply output sharpening to offset this effect: 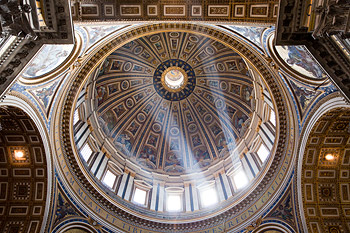 Move your mouse over the buttons on the right to see the effect of output sharpening.

For downsized images, an unsharp mask radius of 0.2-0.3 and an amount of 200-400% works almost universally well. With such a small radius value, one doesn't have to worry about halo artifacts, although new problems such as aliasing/pixelation and moiré may become apparent if the amount/percent is set too high.

For more on image downsizing, see the tutorial on image resizing for the web and e-mail.

If you're thirsting for additional examples, along with a more thorough technical treatment of the above topics, a great book is Real World Image Sharpening (2nd Edition) 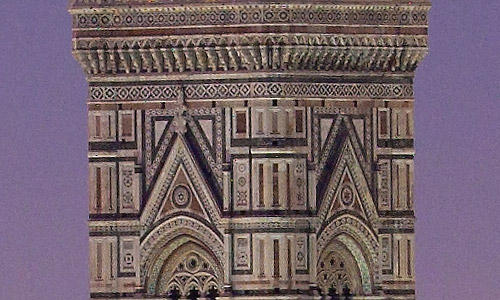 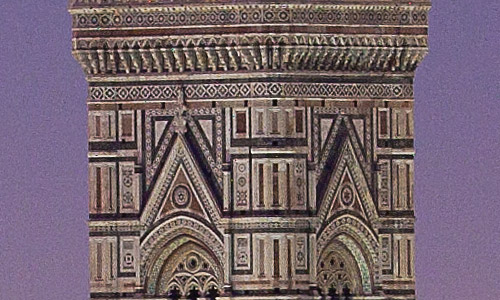 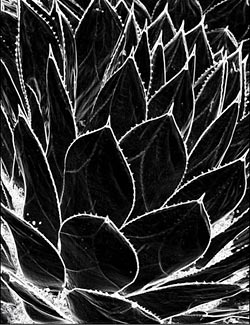 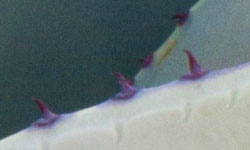 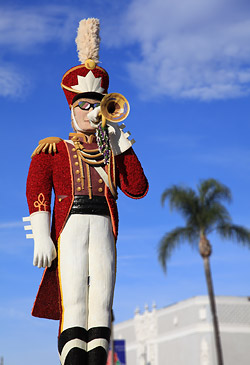