"Image noise" is the digital equivalent of film grain for analogue cameras. Alternatively, one can think of it as analogous to the subtle background hiss you may hear from your audio system at full volume. For digital images, this noise appears as random speckles on an otherwise smooth surface and can significantly degrade image quality. Although noise often detracts from an image, it is sometimes desirable since it can add an old-fashioned, grainy look which is reminiscent of early film. Some noise can also increase the apparent sharpness of an image. Noise increases with the sensitivity setting in the camera, length of the exposure, temperature, and even varies amongst different camera models.

Some degree of noise is always present in any electronic device that transmits or receives a "signal." For televisions this signal is the broadcast data transmitted over cable or received at the antenna; for digital cameras, the signal is the light which hits the camera sensor. Even though noise is unavoidable, it can become so small relative to the signal that it appears to be nonexistent. The signal to noise ratio (SNR) is a useful and universal way of comparing the relative amounts of signal and noise for any electronic system; high ratios will have very little visible noise whereas the opposite is true for low ratios. The sequence of images below show a camera producing a very noisy picture of the word "signal" against a smooth background. The resulting image is shown along with an enlarged 3-D representation depicting the signal above the background noise.

The image above has a sufficiently high SNR to clearly separate the image information from background noise. A low SNR would produce an image where the "signal" and noise are more comparable and thus harder to discern from one another.

A camera's "ISO setting" or "ISO speed" is a standard which describes its absolute sensitivity to light. ISO settings are usually listed as factors of 2, such as ISO 50, ISO 100 and ISO 200 and can have a wide range of values. Higher numbers represent greater sensitivity and the ratio of two ISO numbers represents their relative sensitivity, meaning a photo at ISO 200 will take half as long to reach the same level of exposure as one taken at ISO 100 (all other settings being equal). ISO speed is analogous to ASA speed for different films, however a single digital camera can capture images at several different ISO speeds. This is accomplished by amplifying the image signal in the camera, however this also amplifies noise and so higher ISO speeds will produce progressively more noise. 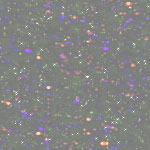 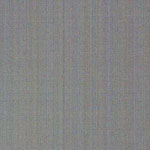 Random noise is characterized by intensity and color fluctuations above and below the actual image intensity. There will always be some random noise at any exposure length and it is most influenced by ISO speed. The pattern of random noise changes even if the exposure settings are identical.

Banding noise is highly camera-dependent, and is noise which is introduced by the camera when it reads data from the digital sensor. Banding noise is most visible at high ISO speeds and in the shadows, or when an image has been excessively brightened. Banding noise can also increase for certain white balances, depending on camera model.

Although fixed pattern noise appears more objectionable, it is usually easier to remove since it is repeatable. A camera's internal electronics just has to know the pattern and it can subtract this noise away to reveal the true image. Fixed pattern noise is much less of a problem than random noise in the latest generation of digital cameras, however even the slightest amount can be more distracting than random noise.

The less objectionable random noise is usually much more difficult to remove without degrading the image. Computers have a difficult time discerning random noise from fine texture patterns such as those occurring in dirt or foliage, so if you remove the random noise you often end up removing these textures as well. Programs such as Neat Image and Noise Ninja can be remarkably good at reducing noise while still retaining actual image information. Please also see my section on image averaging for another technique to reduce noise.